Death, Taxes and Mine Tailings

​Death and taxes can’t be avoided, and for metal mines and their tailings, the story has been pretty much the same; tailings are an unavoidable reality. Itronics’ Rock Kleen, a Revolutionary Silver/Gold Recovery Technology, is looking to change that.

Nevada – The Silver (and Gold) State

Itronics Inc. is a “Cleantech Materials” company based in Reno, Nevada. If Nevada were a country, it would be the fifth largest gold producer in the world, and as all Nevada gold deposits contain silver, one of the top fifteen in silver production. For comparison, South Africa was once the world’s largest gold producer (currently 8th), and today, many of South Africa’s gold ounces are recovered by processing gold mine tailings. As far as the U.S. is concerned, it is currently the world’s fourth largest gold producer, yet surprisingly, zero gold ounces are produced by processing mine tailings. Because of this, and because of its strategic proximity to silver/gold mine tailings in Nevada, Itronics is targeting its Rock Kleen Silver/Gold Recovery Technology to address silver/gold mine tailings that are peppered throughout the “Silver State”. Worldwide, silver/gold tailings amount to approximately 2 billion tons per year, while copper tailings add another 3 billion tons per year. All considered, there is a virtually unlimited supply of tailings, and now, because of Itronics, the technology exists to capitalize on the whole resource.

The most effective leaching agent for recovering gold from mined ore has always been cyanide, but it has proved less effective at recovering silver; this means that silver/gold tailings potentially contain higher amounts of soluble silver. As a result, silver/gold tailings are the primary target for Rock Kleen. Looking at the tailings pyramid (below), copper tailings is a possible secondary recovery target; initial testing has returned promising results. Unlike silver/gold ore, which uses cyanide to leach the metals, copper uses sulfuric acid as its leaching agent. Testing has demonstrated that Rock Kleen will neutralize residual sulfuric acid. All told, the combined yearly tailings from silver/gold and copper mines represent over 5 billion tons of raw materials for processing into industrial minerals. 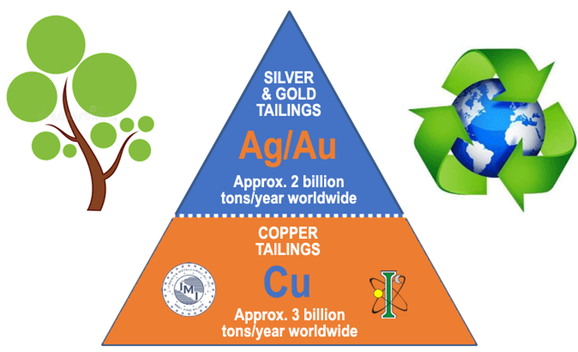 ​Along with silver bearing glass, Rock Kleens’ parent company, Itronics, recovers three U.S. critical minerals from its printed circuit board refining segment; these include tin, for which there is no U.S. mine production, antimony, produced in the U.S. on a very limited scale, and palladium, a platinum group metal (PGM).

Rock Kleen can process tailings that already exist at thousands of sites in the U.S. and abroad. After initial recovery efforts are made for metals and other materials, tailings can be converted to industrial minerals for sale. Rock Kleen’s novel chemistry also serves as a catalyst for a ‘circular mining economy’, where ‘mined waste’ is brought into the marketplace, potentially reducing the need for new mining projects. Additionally, industrial minerals offer a wide array of uses; one of the large tonnage uses is sand. Sand is used to make concrete, which amounts to nearly 200 million tons per year in the U.S.  Worldwide, this number balloons to 1.3 billion tons. Other major usages exist, and specialty products from mineral ‘fines’ and ‘clays’ can produce significant revenue; this provides Itronics with large target markets.

Traditional mining enterprises are the norm, while companies that primarily process tailings are exceedingly rare; there are several reasons for this. Firstly, silver and gold need to be at prices high enough to make tailings an economically viable recovery target. As Rock Kleen technology and metal prices advance, more tailings piles and dams should prove to be attractive recovery targets. Secondly, tailings processing requires a unique blend of disciplines, the cornerstone of which is advanced chemical science and engineering; specific issues to consider are the required process or processes to be implemented at a given tailings site, as well as the complex measurement and separation technologies necessary to capitalize on the resource. For Itronics, Rock Kleen is a culmination of over 30 years of advanced, award winning chemical science and engineering.

Globally, only a handful of mining companies profitably process tailings on a large scale; these companies are primarily in South Africa and include, but are not limited to;

What makes Rock Kleen a revolutionary and disruptive technology? Rock Kleen not only recovers residual precious metals, base and ferrous metals, and nutrient materials, it also does the extraordinary; as touched upon earlier, Rock Kleen goes that last full mile and eliminates residual cyanide and nitrogen used in original silver/gold mining. The remaining rock is rendered clean so it can used, or sold as industrial minerals.

Rock Kleen was developed to turn spent silver/gold mine tailings into a valuable resource; in the process it eliminates waste, cleans the environment, and targets the mined product for 100 percent beneficial use. In doing so, Rock Kleen has the potential to revolutionize the global silver/gold mining industry. Rock Kleen can assist silver/gold mining companies in taking the steps necessary toward the safe and responsible stewardship of mine tailings, while turning a profit; the great potential in this is a cleaner, safer, more socially responsible and profitable mining industry.

Until now, just like death and taxes, metal mine tailings were just a fact of life that had to be tolerated and dealt with. Now, because of Rock Kleen, tailings can not only be a new profit center, they can be completely eliminated once recovery efforts are complete. 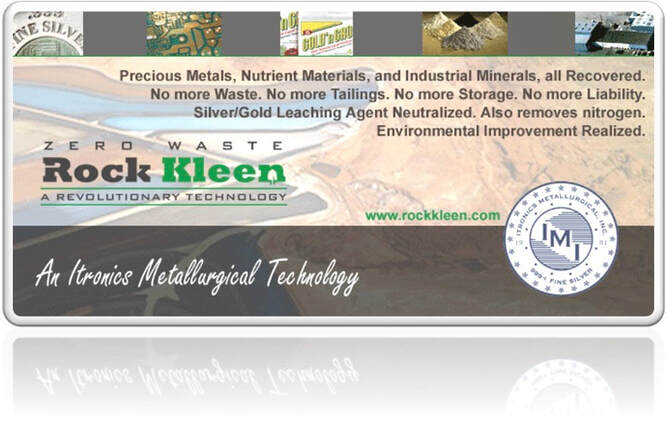 Itronics Inc. is an emerging Cleantech Materials growth company that utilizes science and engineering to create and commercialize recycling, mineral, and nutrient technologies. Itronics manufactures GOLD’n GRO Multi-Nutrient Liquid Fertilizers, its flagship product, and produces Silver. Rock Kleen is part of Itronics Cleantech Materials Portfolio, which is primed to fuel its 10-year business plan to grow annual sales from $2 million in 2019, to $113 million in 2025.